Fortec Motorsport made the most of a difficult weekend in the F4 British Championship certified by FIA – powered by Ford EcoBoost at Silverstone to keep its respective title challenges on track.

The Daventry-based team arrived at the 1.6-mile Northamptonshire circuit, in many respects a ‘home race’, keen to build on recent momentum, extend the lead in the Teams Cup and continue both Joel Granfors and Ollie Gray’s march up the championship standings.

Both cars qualified in the top ten after a hard-fought session, with Granfors then improving in race trim to seize fourth, the Swede falling just shy of adding a sixth podium finish in the ten previous races.

Gray led the line for the team in Sunday morning’s reverse grid race, the Brit improving three spots to seventh, including crucial overtaking points, with Granfors a late retiree after being forced into the pits with suspension damage over the kerbs at Copse.

It would be a bruising end to the triple header live on ITV4 later that day, with both cars side-lined as a result of damage. In Granfors’ case, a move around the outside of Rees at Brooklands put the Swede onto the kerb, and on a collision course at Luffield, before coming to rest in the gravel.

For Gray, it was a case of ‘wrong place, wrong time’, the 15-year-old tagged by a spinning Zagazeta at Brooklands after the Peruvian was tagged by another car on the inside line.

Fortunately, the high rate of attrition also extended to several of the team’s chief title rivals, the net result of which means the team leaves Silverstone with a 29-point advantage in the Teams Cup, and with Granfors and Gray still in the hunt for the Driver’s honours.

Donington Park, Leicestershire hosts the penultimate round of the season on 9-10 October.

“It’s been a really frustrating weekend for the team. We qualified slightly further back than we’d have liked, but the margins are so small around this circuit, an extra tenth would have comfortably put us a couple of rows further forward.

“Unfortunately, when you’re back in the pack, that just increases the likelihood of getting caught up in incidents, particularly when everybody’s trying to make their way through on a circuit where you can overtake.

“Our reliability has been one of our strongest points this season; to put this weekend into perspective, we’ve had the same number of retirements from damage as we’ve had from the rest of the season so far combined.

“It’s a bit bruising, but there are still six races left to go, and one saving grace is that everybody’s had a slice of bad luck this weekend. What’s done is done, and now we move on to Donington Park.”

"This has been a weekend to forget. It's been really difficult, and we've had too many issues combining in one weekend. I tried my best with what I had, but it wasn't easy. We need to sit down and analyse this, and I'm sure there are lessons to be made.”

"Luckily for us, the other guys (in title contention) didn't have the best of weekends either. We're still in it, although it's looking slightly more difficult, so in some ways it's been a little bit of damage limitation."

“Of course, it’s frustrating to not finish two out of three races in a weekend, particularly when our pace was looking so strong, but we have to take the positives from it.

“We’re still in the championship fight, there are six races to go and plenty of points to play for, and if this weekend at Silverstone has shown us anything, it’s that consistency is probably going to play a significant part in whoever does end up winning the title.

“The best thing for us to do now is move on and focus at Donington Park, where I’m sure we’ll have the car and the performance to be competing up front again.” 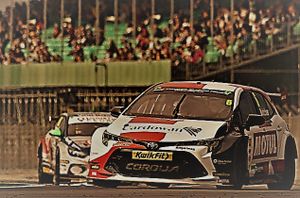