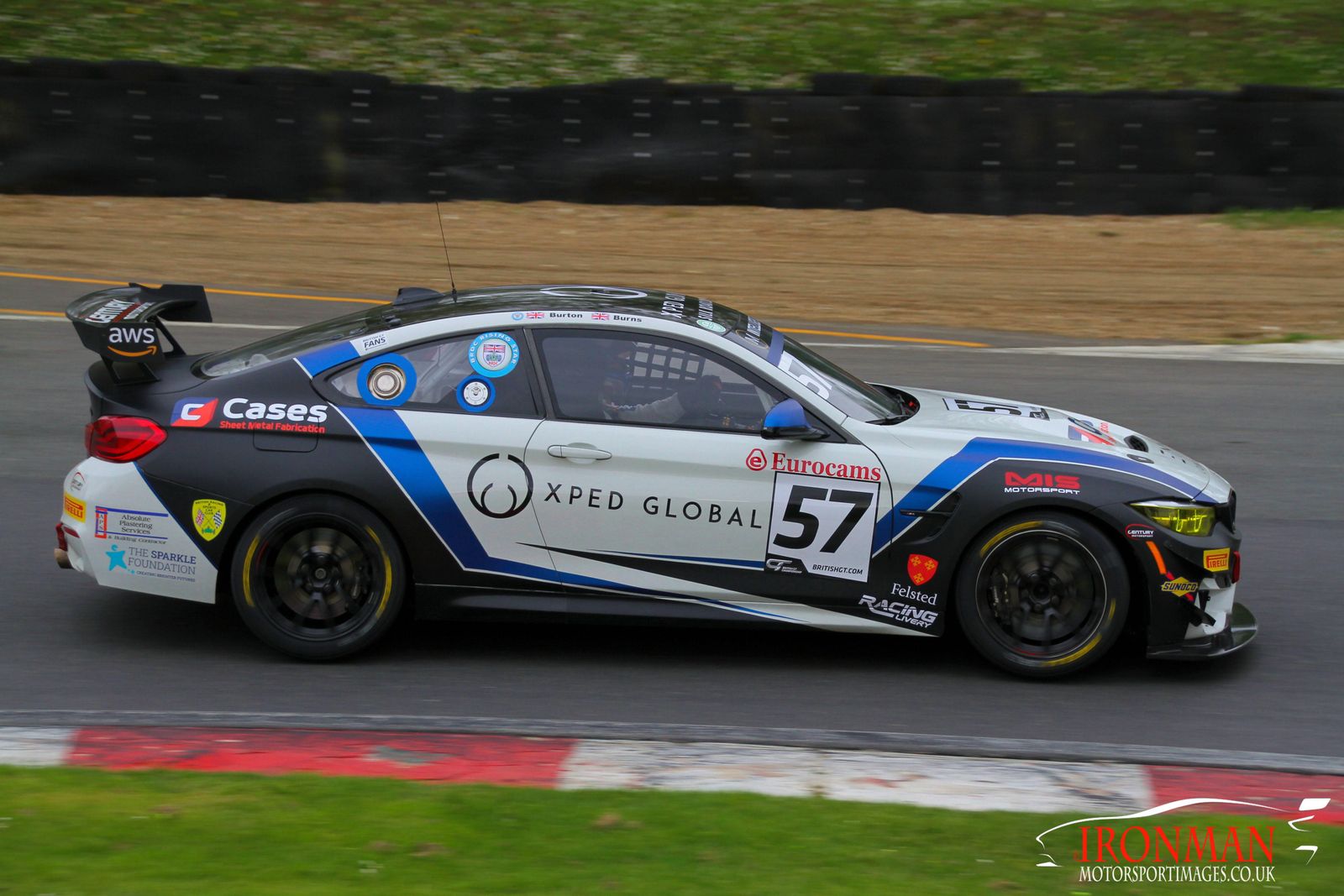 WPI Motorsport's Michael Igoe and Phil Keen showed everyone that they are gonna be a force in 2021 by dominating the opening round of the Intelligent Money British GT Championship at Brands Hatch.

Another strong showing by Team Abba Racing's Richard and Sam Neary who converted their Silver-Am pole to a Silver-Am win and fifth overall.

Heartbreak for Assetto Motorsport as they looked set for a debut GT4 win but their Ginetta suffered a left rear puncture late on in the race which handed the lead to the #57 Century Motorsport BMW of Gus Burton and Will Burns who went on to take the win in GT4.

GT3: Igoe and Keen give WPI Motorsport their first win of the season.

Despite the close qualifying session on Saturday afternoon it was the #7 Beechdean AMR that took pole with the #18 WPI Motorsport Lamborghini a long side them on the front row.

Ten minutes before the cars were due to leave the pits and head to the grid, there was a little shower of rain and with the rain falling the teams delayed sending their car out, but it was soon clear that it was only a brief shower and all cars would start the race on slick tyres despite the race being declared wet.

Seven minutes into the race the lights were out on the safety car and it was a great start by Andrew Howard in the #7 Beechdean AMR who kept hold of the lead going into paddock hill bend and Michael Igoe was 2nd in the WPI Lamborghini.

Once the safety car was back in the front two again made great starts and began to pull away from the field again but this time Igoe made his move and took the lead of the race going into Druids and soon looked the faster of the front two.

The front two were pulling away from the rest but that was soon undone by two safety car interuptions after the #9 Century Motorsport BMW made contact with the #15 Toyota Gazoo Racing UK's Supra at Hawthorns and sent the Toyota spinning into the gravel trap but once out limped back to the pits and out of the trace with right rear suspension damage.

Contact at Paddock Hill between the #69 Ram Racing Mercedes of James Cottingham and the #1 Barwell Motorsport Lamborghini of Adam Balon saw them both spinning into the gravel and the safety car called for the second time.

At the second restart Igoe had a lapped GT4 car between him and the #7 of Andrew Howard, #63 of Leo Machinski and #8 of Richard Neary and was able to make the most of it and again got a good jump on the others and that was helped when Howard and Machinski were fighting for second and when Machinski took Howard at Surtees, Igoes lead was up to four seconds when it was time to pit.

Once the pit window was open they all came in and Phil Keen taking over the #18 WPI Lamborghini was soon back out on track, but Dennis Lind now in the #63 Barwell Lamborghini had a delayed stop due to a broken GPS unit and lost two places to the #7 Aston Martin of Jonny Adam and the #6 Mercedes of Yelmer Buurman.

The #63 Lamborghini of Dennis Lind was soon up to third after a brilliant three wide move at Westfield with 28 minutes remaining and was soon on a charge to try and close the gap to the #7 of Jonny Adam, but despite finishing the race faster Dennis Lind finished just three tenths of a second behind the second placed #7 Jonny Adam.

The #6 Ram Racing Mercedes-AMG GT3 of Buurman and Loggie came home fourth despite their Mercedes lacking pace compared to the Lamborghini's and Aston Martin ahead.

Team Abba Racing starting on the Silver-Am pole looked set for a overall podium finish but after a couple of going wide moments saw the #8 Mercedes lose a couple of places, but with Sam Neary now at the wheel came back strong and took the Silver-Am class win and fifth overall.

Team Parker Racing's #66 Porsche of Scott Malvern and Nick Jones made up five places to finish sixth, but it was a case of what might of been for the #11 JRM Bentley Continental GT3 of Kelvin Fletcher and Martin Plowman who received a drive-through for over taking before the timing line during a safety car period and they finished seventh ahead of the #5 Balfe Motorsport McLaren of Stewart and Lewis Proctor.

Starting from on GT4 pole was the #57 Century Motorsport BMW of Will Burns and the #56 Assetto Motorsport Ginetta of Mark Sansom joining him on the front row.

Will Burns made a great start and shot into the lead ahead of the #61 Academy Motorsport Ford Mustang of Will Moore and it was such a good start that Burns managed to pass a GT3 car and had the joy of having it between him and Will Moore's Mustang.

Burns was on a charge to try and make as up much of a gap as he could and try to make up for the additional 26s extra time in the pits due to it being a Silver-Cup entry, but every time he got a decent gap it was undone by two safety car interruptions.

Burns lead from the #61 Ford Mustang and the #42 Steller Motorsport Audi of Richard Williams up to the pit window opening and because of the safety car interruptions he only had a lead of a couple of seconds and with the extra time needed in the pits the #57 BMW faced fight back to get to the front during the second half of the race.

The safety car interruptions having closed the field it also brought the Pro-Am cars into the mix and once things had finally settled it was the #9 Century Motorsport BMW of Andrew Gordon-Colebrooke that rejoined in the lead thanks to a great opening stint by team mate Chris Salkeld who managed to keep the car in the top five at the half way point of the race.

But that lead didn't last long as Charlie Robertson having taken over the #56 Assetto Motorsport Ginetta from team mate Mark Sansom, wasted no time overtaking the #9 BMW and into the lead in GT4.

Robertson was now on a charge and pulled clear of the rest and looked set to give Assetto Motorsport their debut win in GT4, but all hope of a debut win were dashed when Robertson was forced to make a late pit stop due to a left rear puncture and that left the door open for the two Century Motorsport BMW's.

Despite the extra time in the pits Gus Burton now taken over from Will Burns in the #57 BMW rejoined in third and after some great fighting with Gordon-Colebrooke in the #9 BMW, Burton pulled off a brilliant pass around the outside at Paddock Hill to move up to second in GT4, but a massive seventeen seconds behind the #56 Ginetta which was leading, but that gap vanished when the Ginetta had issues handing the lead to the #57 BMW which went onto win.

The #9 BMW of Gordon-Colebrooke came home inn second to give Century Motorsport a one-two and James Kell and Jordan Collard in the #2 Team Rocket RJN kept themselves out of trouble to clinch the final podium stop.

Robertson in the #56 Ginetta recovered to finish fourth ahead of the #42 Williams/Fielding Audi who were in the mix until they received a 10s stop-go penalty for a unsafe release during their pit stop.

The #15 Toyota Gazoo Racing UK's Supra looked strong in the opening laps, but after contact with #9 BMW of Salkeld at Hawthorns and despite being helped out of the gravel managed to make it back to the pits but retired with right rear suspension damage.

The #3 Team Rocket RJN McLaren of Alain Valente/Michael Benyahia had a nightmare weekend after losing an engine and losing most of the track time on Saturday, but the team did an all-nighter and did the engine change, only for them to see the #3 McLaren pit at the end of the green flag lap with what turned out to be an electrical fault. 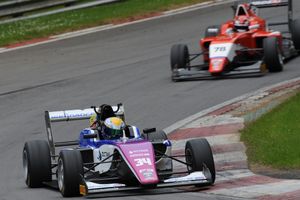 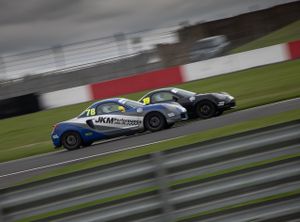