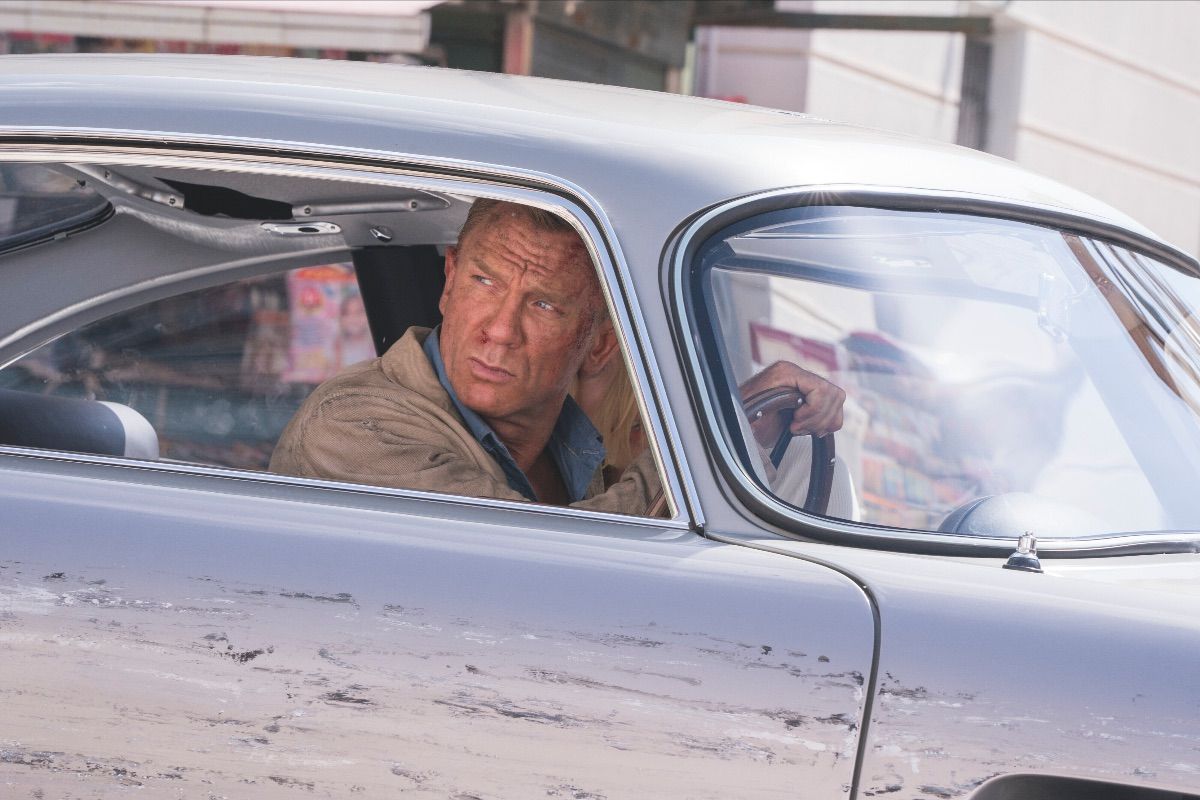 A display of cars from the latest 007 blockbuster No Time To Die will be in pole position at Silverstone for The Classic over the end-of-summer bank holiday weekend (26-28 August).

To celebrate 60 years of James Bond on the silver screen, EON Productions and Christie’s are teaming up to present a very special two-part charity auction with 60 standout lots.

The live auction on 28 September includes seven cars plus a motorbike with starring roles in the 25th Bond film No Time to Die and all eight vehicles will be on public show for the first time at the world’s biggest classic motorsport festival at Silverstone.

Topping the bill at The Classic is an iconic Aston Martin DB5 stunt car as driven by James Bond (Daniel Craig) in the opening chase sequence set on the historic streets of Matera in Italy. It is the only DB5 stunt car ever to be released for public sale and is expected to raise between £1,500,000 and £2,000,000 under the Christie’s hammer.

The stunning DB5 will line-up alongside seven other vehicles including an Aston Martin V8 and Triumph Scrambler 1200 XE also driven and ridden by James Bond in No Time To Die plus limited edition Land Rover and Jaguar models, as driven by 007’s adversaries in the box office smash.

“We love celebrating major anniversaries at The Classic, and with our ‘Best of British’ theme, having the opportunity to mark 60 Years of James Bond is very special,” enthused Nick Wigley, CEO of The Classic promoter Goose Live Events. “It’s the first time these 007 cars will be on display together and we are honoured to host them.”

Silverstone is no stranger to James Bond movies having been used for a car chase sequence in the fourth movie Thunderball – featuring Sean Connery in an legendary DB5 – filmed at the track back in 1965.

The exceptional collection of vehicles is not the only world exclusive showcase set to wow visitors to The Classic. The eye-catching 007 cars will be joined by all seven of Sir Lewis Hamilton’s title winning Formula One racers lining-up on display together for the very first time.

As well as an unrivalled line-up of 20 action-packed showdowns for the very best of racing grids from yesteryear, other highlights at The Classic include a new Foodie Fest with masterclasses from well-known TV chefs, three nights of live music with chart-toppers Sister Sledge, Gabrielle and Rick Astley, a pop-up shop from Jeremy Clarkson’s Diddly Squat Farm and extreme sports displays.

Providing exceptionally good value, tickets also give access to test drives in the latest generation of electric vehicles in Switch Live powered by myenergi as well as access to both racing paddocks and open trackside grandstands.

Full details of tickets for The Classic 2022 at Silverstone – which must be purchased in advance – can be found at: www.silverstone.co.uk/events/the-classic.

For more information on the eagerly-anticipated Sixty Years of Bond auction: https://www.christies.com/events/james-bond-sixty-year-anniversary/what-is-on

60 YEARS OF JAMES BOND AUCTION SHOWCASE AT THE CLASSIC

NO TIME TO DIE ASTON MARTIN REPLICA DB5 STUNT CAR
This Aston Martin DB5 stunt car is one of only eight built specifically for James Bond and is the only DB5 stunt car to be released for public sale by Aston Martin and EON Productions.

Aston Martin has been associated with the James Bond franchise for over 50 years and has featured in thirteen films to date. The DB5 stunt car was exclusively engineered and handcrafted for No Time To Die. All the DB5 stunt cars were modified in different ways for use, this car being one of a few to include the bespoke No Time To Die gadgets and mocked-up side panel damage.

In the film, the DB5 stunt car features in an exciting opening chase sequence, driven by James Bond (Daniel Craig) through Matera, Italy.

The DB5 stunt car features a modern 3.2-litre, straight 6, petrol engine alongside a manual gearbox. The suspension and braking system are completely bespoke and were uniquely engineered by Aston Martin Special Projects guided by Special Effects Supervisor, Chris Corbould. The body panels are all carbon fibre, while the dash was created through an innovative 3D printing technique, featuring an original DB5 steering wheel and chronograph dials which are aesthetically sympathetic to an original DB5.

PRE-PRODUCTION LAND ROVER DEFENDER 110 NO TIME TO DIE STUNT CAR
Land Rovers have featured in James Bond films for nearly 40 years, from Octopussy in 1983 to the new Defender in No Time To Die (2021). Ten pre-production Defenders were provided for filming and this particular vehicle is VIN 007.

NO TIME TO DIE ASTON MARTIN V8
This 1981 Aston Martin V8 is one of just three modified specifically for James Bond’s No Time To Die and is one of the cars driven by James Bond (Daniel Craig) in the film.

On his return to London, Bond retrieves the V8 from his lock-up, pulling off the dust sheet to reveal the iconic car. Bearing the same registration as the car that played a key role in Timothy Dalton’s The Living Daylights (1987), the car takes Bond from London to Madeline Swann’s (Léa Seydoux) childhood home in Norway via the spectacular Atlantic Road.

The Aston Martin V8 features a V8 5343cc engine alongside a 5-speed manual gearbox to maximise its dynamic capability. The body panels are all made from aluminium, while the handcrafted interior has been made using Connolly leather.

NO TIME TO DIE RANGE ROVER SPORT SVR STUNT CAR
In No Time To Die, a pair of Range Rover Sport SVRs take part in an epic all-terrain chase sequence. Land Rover provided six Range Rover Sport SVRs, in Eiger Grey with Carbon Pack and Narvik Black 22-inch alloy wheels – and this vehicle is one of the six supplied.

The SVRs used in the film feature the same specially tuned suspension as production models devised by engineers at Land Rover Special Vehicle Operations to deliver more responsive handling and tighter body control without compromising comfort – all critical features for the No Time To Die stunt team when putting these supercharged cars through their paces.

The Range Rover Sport SVR takes luxury performance to new heights with enhanced driving dynamics and a powerful 575PS supercharged V8 engine, making it the perfect choice for the role. It can accelerate from 0-100km/h in 4.5 seconds (0-60mph in 4.3 seconds) and has a top speed of 283km/h (176mph), making it the fastest ever Land Rover as well as the most powerful.

Inspired by the specification of the Defenders that appear in No Time To Die, the stealthy Defender V8 110 Bond Edition features bespoke touches that honour Land Rover’s long partnership with the James Bond franchise.

Based on the recently launched Defender V8 110, the Bond Edition is powered by a 5.0-litre supercharged petrol engine, which produces 525PS, 625Nm of torque and drives through an eight-speed automatic transmission. It delivers new levels of performance and driver engagement by combining the V8 with expertly developed suspension and transmission tuning to create the fastest and most dynamically rewarding Defender yet.

NO TIME TO DIE JAGUAR XF STUNT CAR
Continuing Jaguar’s long-standing relationship with the James Bond film franchise, two Jaguar XFs made their on-screen debuts in the 25th film No Time To Die (2021).

Appearing in  pre-credit sequence, the Jaguar XFs are driven by SPECTRE henchmen on the streets of Matera, southern Italy, in pursuit of James Bond (Daniel Craig) and Madeleine Swann (Léa Seydoux).

Jaguar provided six XFs for the film and this vehicle is one of the those supplied. It features Jaguar’s all-wheel drive system with Intelligent Driveline Dynamics. The saloon’s lightweight aluminium-intensive architecture and advanced suspension design enable exceptional handling and agility together with outstanding ride, comfort and refinement.

Jaguar’s Special Vehicle Operations team worked together with the No Time To Die stunt and action vehicle teams to modify and adapt the vehicles to ensure they could perform the dynamic stunts required.

With the same specification as the DBS Superleggera driven by Nomi (Lashana Lynch) in the film, only 25 production cars were made and sold out instantly. Unlike the production cars, this DBS has a unique plaque with etched signatures from producers Michael G. Wilson and Barbara Broccoli and actor Lashana Lynch.

The 715bhp provided by the DBS Superleggera’s 5.2-litre V12 twin-turbocharged engine is befitting of the car’s range-topping status. To this potent mix, the DBS Superleggera 007 Edition adds a raft of styling and design enhancements that further elevate its appeal and unique to the 007 Edition are visually striking Gloss Black diamond-turned Y-Spoke 21-inch-wheels.

This special edition also features a 007 fender badge, finished in chrome with a black enamel infill and Stainless Steel Silver 007 foil applied to the rear spoiler blade. Subtle 007 branding can be found on the door cards, armrest buckle badge and on the rear subwoofer cover.

NO TIME TO DIE TRIUMPH SCRAMBLER 1200 XE
The Triumph Scrambler 1200 XE stunt bike is first ridden by Safin’s assassin Primo (Dali Benssalah) and has a major role in the Matera pre-credit sequences. In No Time To Die, James Bond (Daniel Craig) manages to commandeer the bike for a chase through the streets, culminating in an epic jump into the piazza.

The Scrambler 1200 XE was specially modified to handle the rigours of the Italian action sequence. Stunt Coordinator Lee Morrison worked with the Triumph team to create a stunt motorcycle that would not only perform at a high level, but would look good while doing it. 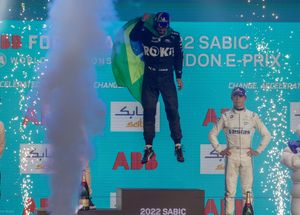 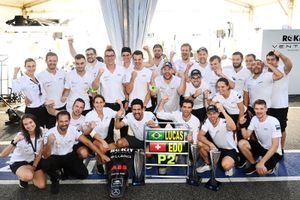