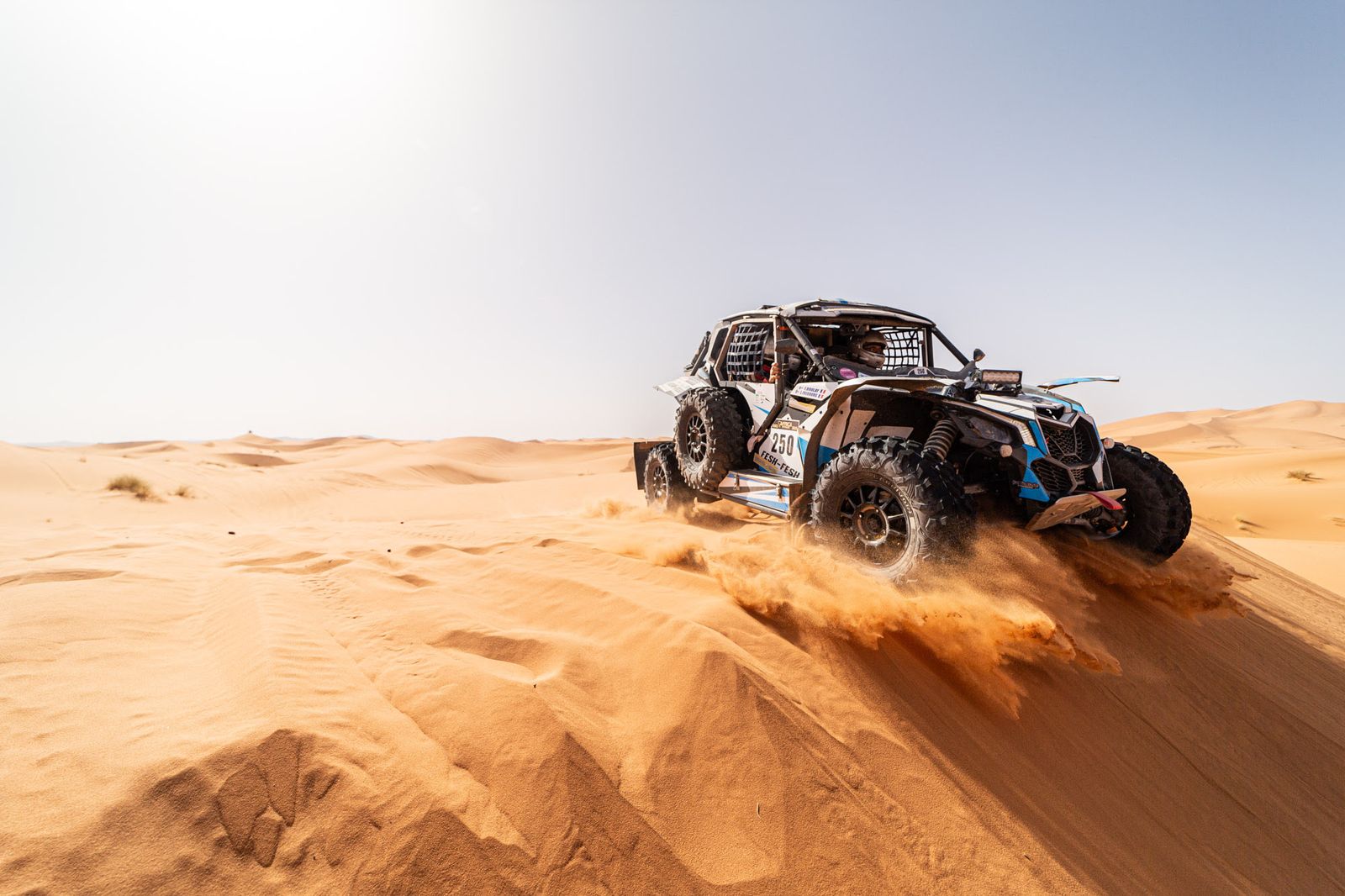 A FIRST STAGE WITHOUT ISSUES FOR THE AFRICA ECO RACE 2022

As soon as the competitors drove off the ATLAS ferry from the Italian company GNV, they set off for a 118km liaison which was just far enough to warm up the engines before diving straight into the race. Tuesday's stage was quite technical with some interesting navigation considering the short 94km stage.

Maurizio GERINI was fastest on the bikes

On two wheels, the Italian Maurizio GERINI imposed himself overall and created the sensation. The HUSQVARNA rider finished 1’04 in front of the KTM rider Stefan SVITKO. This result was to be for seen as the Italian started in 30th position and the day before on the boat he was saying how much he enjoyed this type of terrain. Looking at the Slovakian, who is a rising star of the sport, he assured he had an ideal starting position for the second stage. In third position, we must mention the strong performance from Xavier FLICK, a young rider, who is like the first 2 participating in his first AFRICA ECO RACE. It seems like the french-man has understood how the road-book works as he managed to place his HUSQVARNA just 5’55 behind the leader which enabled him to be the first MOTUL EXTREME RIDER. This category is where each rider gets only 1 box of spare parts which is then transported by the MOTUL organisation trucks. Behind these 3 riders we can find the Italian two time winner Alexandro BOTTURI on his YAMAHA and the Norwegian Pal Anders ULLEVALSETTER, who both rode carefully knowing exactly how long this 6000km race is all the way to Dakar. Francesca GASPERI, the only woman rider this year, finished the stage in 30th position while been spotted by other riders noticing her very technical riding technic on her HONDA. Finally the one and only Quad of the rally, ridden by the Czech Zdenek TUMA signs a 24th position during this first stage clearly showing off his skills behind the handlebars.

Stage victory for David GERARD and Pascal DELACOUR in the cars

Behind the wheel of his OPTIMUS buggy, the AFRICA ECO RACE locals David GERARD and Pascal DELACOUR finished 2’51 in front of their Wacky Races teammates Philippe GOSSELIN and Christophe CRESPO. We need to point out the good performance from the Dutchman Rudy VOLLEBREGT and Gert TRAA finishing in 3rd with their CAN AM SSV just 39” behind the 2nd OPTIMUS. With their good performance they managed to push back the 2ndT3 of Loïc FREBOURG and Franck BOULAY a full 4 minutes away. The Frenchmen finished in 5th position just in front of the Hungarian Imre VARGA and Jozsef TOMA with their TOYOTA Hilux. On the 3rd step of the T3 podium, there is an impressive performance from the Senegalese crew composed of Jean HAYECK-DAGHER and Patrick ANTONIOLLI with their CAN AM.

In the trucks, as expected Thomas TOMACEK delivered while driving alone his TATRA, meaning without mechanic nor co-driver. When looking at the overall rankings, he finished in 11th with over 3” in front of the other TATRA driven by the British crew Andrew WICKLOW, Joseph PEAKE and Quinton Matthew EVANS. The Italian MERCEDES from Giulio VERZELETTI and Guiseppe FORTUNA completes the giants podium.

Yesterday, Wednesday October 19th, the AFRICA ECO RACE competitors had a 466km stage towards Tagounite. Diving into the stage of 447km, it was the first time ever the rally has taken these traditional Moroccan tracks passing through the first dunes in Merzouga.

The majority of the competitors had returned to the bivouac of Bousaïd on Tuseday's evening at 9 pm to attend the daily briefing of the AFRICA ECO RACE. An explanation of yesterday's stage to Tagounite during which Manfred KROISS mentioned the presence of the first dunes and the difficulty of navigation. The Sporting Director was not mistaken since important gaps are already to be noted between the first and their pursuers, and this, on two and four wheels.

Victory of BOTTURI in Motorcycle

Starting in 4th position yesterday morning, Alessandro BOTTURI won by taking his marks on his official Yamaha. The Italian is ahead of the KTM of the Slovak Stefan SVITKO of 00:01:34 and of 00:02:00 the HUSQVARNA of the French Xavier FLICK who confirms his excellent beginning of the Rally. Arriving in the same group of six pilots who preceded the other participants by more than one hour, the Italian Maurizio GERINI finished 4th at the handlebar of his HUSQVARNA at 00:03:56 after having known problems with the fork.

He did well and was ten minutes ahead of the KTM of Pal Anders ULLVALSETER who said at the finish line that at the age of 53, it is appropriate to ride relaxed. The Norwegian was accompanied at the finish line by the British rider Robbie WALLACE, also on a KTM, who also made a good start to the race. In the over 700 category, the Spanish Pol TARRES places his YAMAHA at the 11th position while the only Quad of the race driven by the Czech Zdenek TUMA is classified 18th. Special mention for the Italian rider Francesca GASPERI who finished 14th on her HONDA.

In the general standings, Stefan SVITKO leads the way with a little more than a minute's lead over Maurizio GERINI and a little more than 5 minutes over Alessandro BOTTURI. With a 4th place in the general standings, only 6 seconds behind BOTTURI, Xavier FLICK is the undisputed leader of the MOTUL EXTREME RIDER category reserved for unassisted drivers.

In Car, we take the same people and we start again for the two first places, with the victory of David GERARD and Pascal DELACOUR, 00:10:41 in front of Philippe GOSSELIN and Christophe CRESPO. The notable success of the day went to the CANAM of Loïc FREBOURG and Franck BOULAY, 3rd at 00:21:33. As on two wheels, behind, the gaps are important since after Imre VARGA and Jozsef TOMA, 4th at 00:37:03, the fifth vehicle to pass the finish was clocked at 01:08:31. It is the CAN AM of Jean HAYECK DAGHER and Patrick ANTONIOLLI, the Senegalese crew that had already shone.

In the truck category, the battle of theTATRAs turned to the advantage of Tomas TOMECEK for a little more than 7 minutes on the British crew composed of Andrew WICKLOW, Joseph PEAKE and Matthew Quinton EVANS.

In the general ranking, David GERARD and Pascal DELACOUR already have a lead of just over 13 minutes over Philippe GOSSELIN and Christophe CRESPO. In 3rd position, we find the SSV of Loïc FREBOURG and Franck BOULAY, also leader of the T3 ranking with more than one hour of advance.

Today, Thursday, October 20, the AFRICA ECO RACE will continue its progression towards the south with a 3rd stage of 526 kilometers between Tagounite and Assa. A long special whose main part will be the crossing of the Erg of Chegaga. 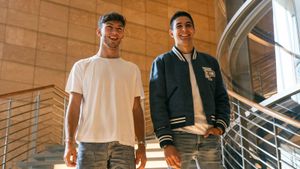 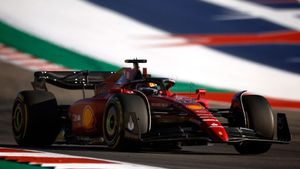