Lights out! First F1 weekend of the 2021 season and its already started with
some surprises. A lot of drama, unpredictability and adrenaline this weekend
was full of.

Red Bull Dominance
Max Verstappen dominated every practice session over the weekend, and secured
pole position for his first race of the season. This gave a lot of hope to many Red Bull fans and speculation whether this season could be the year for his first
championship, is high.

Even though Red Bull was getting a good weekend, wasn’t the best qualifying session for Sergio Perez; the Mexican driver started well in the beginning of the weekend, staying around 4th and 5th place in practice session but on Saturday wasn’t his best and it’s going to start 11th this Sunday race.

Perez had problems with his car at the weekend, and necessary a new Honda energy store and control electronics. AlphaTauri driver Pierre Gasly had identical issues and had his replacements on Saturday.

It wasn’t the best start for the Aston Martin driver; during qualifying session Nikita Mazepin span off with a VERY Rookie mistake, at Turn 13, to produce the first yellow flag of the day. Both Sebastian Vettel and Esteban Ocon didn’t do their best times after being ‘forced’ to slow down.

At Turn 1, just minutes before qualifying was over, Carlos Sainz caused the second yellow flag of the day, which didn’t better his positions for Sunday.

Saturday, we already knew that Vettel was going to be called by the stewards, and the Aston Martin driver was penalised with a five grid place penalty and three penalty points after he failed to respect the "double yellow" flags at turn 1.

Another driver that didn’t have the best start to the weekend, was Haas rookie, Nikita Mazepin; after his spin in qualifying and a yellow flag meant that the whole track had to slow down for the first sector,  Jolyon Palmer, former Renault driver at BBC Radio 5 Live Sports, was quoted "Mazepin broke ‘gentleman’s code of not his waiting your turn, so everyone gets a lap."

After this situation, Mazepin explained the reason why he jumped out-lap queue in Q1. "He said his team instructed him to overtake his rivals during the first part of qualifying".

In an interview with the Motorsport.com website, the Haas driver defended his actions by saying “I want to be very clear on that. I’ve also been already informed about this. I am team’s driver.” “We have radio intercom and I’m instructed to do what I’m told. So, I’ve crossed the start/finish line with two seconds left under by belt, otherwise, I would have got a red flag, and there was no time to wait”.

Mazepin also affirmed that he was in the queue but was told that he needed to go or the session would be over.

The Bahrain race couldn’t have started in a more surprising manner. Sergio Perez had problems before racing with his energy store and during his formation lap the car just turned off, giving no response for some minutes, forcing a second formation lap. Perez was however, able to restart and take part in the race.

After just one lap, Nikita Mazepin crashed at turn 3, calling for the first safety car of the day.

It was a messy start, with yet another incident with Pierre Gasly and Daniel Ricciardo, causing the AlphaTauri driver lose his front wing, forcing him to pit earlier than expected and the second safety car of the day was deployed.

Max Verstappen also had problems at the beginning of the race, feeling something weird with the car, and saying that the grip wasn’t perfect but nothing materialized and he lead for the majority of the race.

Nikita wasn’t the only driver with a DNF this first race in Bahrain, Fernando Alonso had brake problems and retired early too.  The Alpine Team gave an update in their social media page saying that some debris trapped in the brake duct was the problem,  causing them to overheat.

Sebastian Vettel locked up at turn 1, crashing himself with Alpine’s Esteban Ocon, damaging his wing at lap 46.

At lap 51 there was an amazing battle between Lewis Hamilton and Max Verstappen, with the Mercedes driver making a little mistake at turn 10. Old tyres meant it could be the end of Verstappen's lead. Lap 53 Max Verstappen was finally in front of the pack but had to give his place back to Hamilton after the overtake was done off-track limits. Verstappen was slightly annoyed that he wasn't penalized as he was convinced even with a 5 second fine, he could have easily pulled more than 5 seconds away from Hamilton but Team Principle Horner, said there was no option from race control.

In the end, the Red Bull driver couldn’t get grip or regain the lead but it was an exciting fight between these two F1 giants and an amazing first race of the season.

Lewis Hamilton takes the first Grand Prix of the season in Bahrain .  "Fastest Lap" of the day went to Valtteri Bottas (1.32.09) and "Driver of the Day", after all that happened during the race, was awarded to Sergio Perez which was very well deserved.  Next stop -  Italy (April 18th). 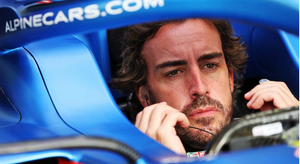